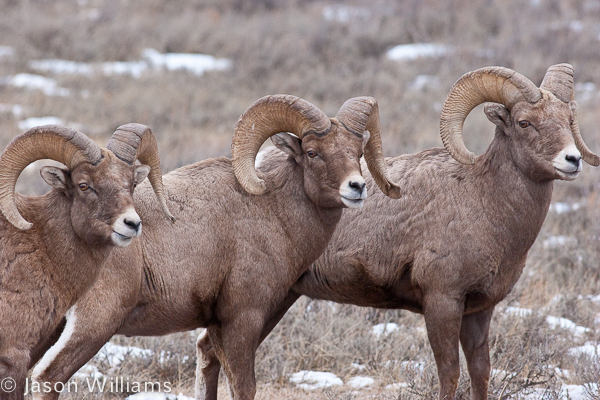 The fall’s first snowflakes fall gracefully from an early October storm. Delicately crafted pellucid stellar dendrites, individually fragile and unique, accumulate painting the landscape white; the rich colors of summer hidden under a thick blanket of snow. The towering spires and craggy heights of the the high country are the first to hold snow from these early storms but gradually the snow line creeps to the valley floor of Jackson Hole. The chill in the air conspires with the falling snow to warn of the inevitable change. Winter is just around the corner and the abundance of summer is about to come to an end.

The snow thickens with each winter storm, blanketing the once green landscape with several feet of impenetrable frozen water. The irony is obvious and vicious. The same water stored on top of the high mountain sedges, grasses and flowers of this season is integral to regenerate next year’s crop. The magic of winter covers the delicious forage of infinite and unexplored alpine meadows and forests found in the high country forcing wildlife to migrate in search of food and milder weather.

Elk, Moose, Mule deer, Bighorn sheep and Bison all get the message. It is time to move down into the relatively mild lower elevations of Jackson Hole. Named after Davey Jackson, an early American trapper drawn to the area by the abundance of flora and fauna, Jackson Hole is a large high desert mountain valley in the rain shadow of the Tetons. As winter storms rage across the west from the Pacific, they are forced up and over the high peaks of the Tetons where they drop the majority of their precipitation. The leeward side of a mountain range is drier and spared the worse of the weather. Access to browse left over from the summer growing season draws wildlife from the surrounding mountain ranges.

Generation after generation teach their young how to survive winter by either hibernating or migrating to winter food sources and milder weather. Animals that spent the summer grazing hundreds of square miles within the five mountain ranges that surround Jackson Hole now join together to survive the winter on the valley floor. Predators and scavengers alike follow this migration of prey species with mountain lions, wolves, coyotes and bald eagles easily spotted in the same wintering grounds.

Hundreds of mule deer will gather to graze on the relatively snow free slopes of east and west Gros Ventre buttes. Thousands of elk will spend the winter in at low elevations with the largest herds found just north of Jackson on the National Elk Refuge. A short drive onto the elk refuge from the east side of town will lead to Miller butte where a large herd of wintering big horn sheep can be viewed daily. It is not uncommon to see rams sparring or young sheep chasing each other over and across the rock faces of the butte.

Bison will be scattered throughout the valley depending on snowfall but can usually be found on the elk refuge or on the eastern foothills of the Gros Ventre range north of the town of Kelly.

Moose, sometimes difficult to find in the summer, can be found gathering on Antelope flats in Grand Teton National park in loosely arranged groups. Sometimes as many as 30 can be seen from one vantage point grazing the sage flats surrounding Blacktail Butte. Moose are also common in the neighborhoods on the west bank of the snake river from Jackson Hole Mountain Resort to Wilson. Moose, first observed in Jackson Hole in 1915, have flourished around people and find refuge from predation by living in proximity to people, sometimes making themselves comfortable on someone’s front porch!

For many a chance to see the more elusive species can be the highlight of a vacation or a season. Over the last few years wolf activity in Jackson Hole has increased dramatically with 5 different wolf packs using the valley regularly. Watch for wolves early in the morning and late in the evening anywhere north of Jackson to Moran junction. Open grassland without tall sage or trees is your best bet with the Elk Refuge, Antelope Flats and Elk Ranch being the best places to consistently see wolves.

It is easy to confuse coyotes with wolves. For many our coyotes look big but don’t let the winter coat fool you. An average coyote weighs between 35 and 40 pounds compared to a wolf who can weigh up to 150 pounds! If you see a canine jumping up and pouncing into the snow you are most likely watching a coyote. If you see a canine that is jet black, you are definitely watching a wolf (about half of the wolves in the Greater Yellowstone Ecosystem are black). Other tell tale signs include chasing elk, moving in an organized pack (though coyotes will sometimes pack up too) and shape of the face and tail.

Winter is a tough time for wildlife but a great time to see them. They migrate down into the valleys for the same reason people we have chosen to live here. They follow our roads because we followed theirs. Geographic weaknesses used by wildlife for thousands of years are also conducive for our own mobility. Winter is a time of quiet reflection and energy conservation. Staying warm and alive means moving as little as possible and feeding as much as possible. This makes wildlife viewing in Jackson Hole in the winter awesome. As a visitor to their winter ranges we should be respectful, keep our distance and minimize our impact on the wildlife we love.

(This article first appeared in the winter edition of the Teton Journal 2012.)