Home Blog The grizzly bears of Wyoming need your help!

The grizzly bears of Wyoming need your help! 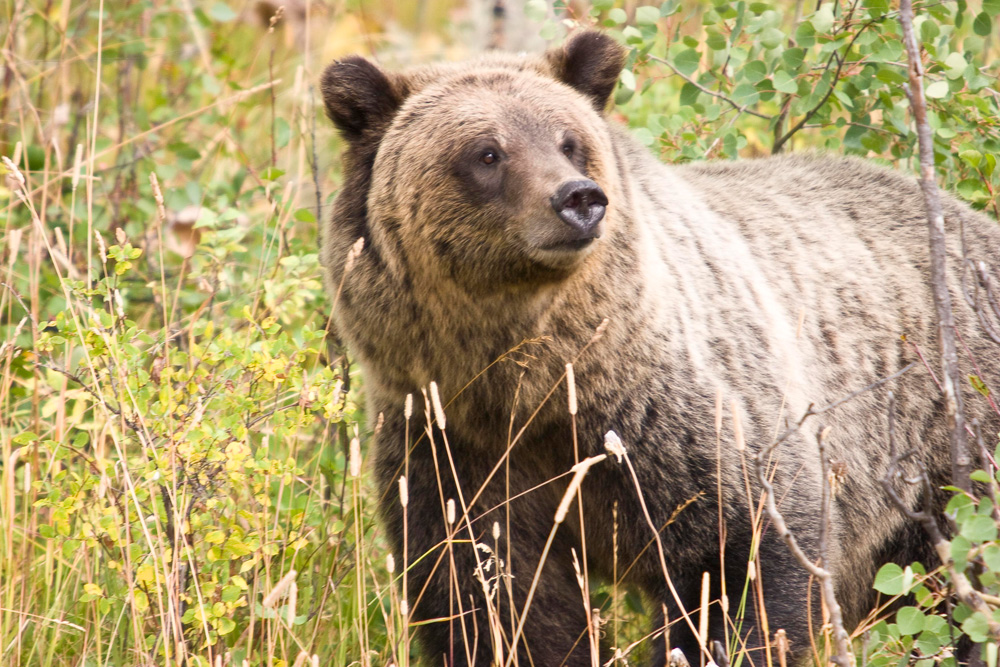 Picture the scene: it’s fall in Jackson Hole. The last remaining aspen leaves shift and bounce against a sharply cold wind. You can smell the season changing and the newly fallen snow is a constant reminder that winter is just around the corner. As you look out across an open slope you see a mid-sized grizzly sow searching for just a few more calories before entering her den for the winter. As you look closer you realize this is bear number 399, the famous matriarch grizzly sow of Grand Teton National Park. Hundreds of thousands, if not millions, of people have had the opportunity to safely watch this incredible animal living out her life within Grand Teton. Articles, stories and books, like the recently released Grizzlies of Pilgrim Creek by Tom Mangelsen and Todd Wilkinson have closely documented her life in Jackson Hole. By all accounts this one bear has become a global ambassador for not only bears but the preservation of wild places throughout the world.

The serenity and peace of being in such a pristine place watching this famous bear is almost overwhelming. The world is silent except for the quaking of leaves and the occasional sharp exhalation from the sow’s nose as she sniffs, scratches and digs for anything that might hide beneath the soil. What an amazing day you think to yourself as you raise your binoculars to your eyes to study her precise movements and careful behaviors. Her head lifts suddenly and she rises onto her hind legs in a human like stance. She has noticed something in the opposite side of the meadow. 399 smells the air, mouth slightly open as she faces the direction of concern, trying to discern what danger may be approaching.

As you watch this unfold a sharp crack rings out from the direction she is looking. Grizzly 399 drops down suddenly and spins around as if trying to scratch an itch on her rear leg. An echo from the gunshot reverberates from the opposite hillside as she struggles to stand up. She is clearly in pain, confused and disoriented. A second shot rings out, followed by a second echo that slowly fades as grizzly 399 rolls down the hillside coming to rest sprawled against a lone aspen. Her lifeless body replacing wind to shake the leaves. This once famous bear that brought joy to many, that drove tourism to Wyoming and stood for a symbol of wilderness around the world now destined to be home décor.

Thankfully this terrible scenario has not yet played out. As far as we know grizzly 399 is still roaming free in Jackson Hole, protected by her threatened status under the Endangered Species Act and added protections afforded animals, like her, lucky enough to live mostly within a national park. Trophy hunting of grizzlies is not currently allowed in Wyoming and even management actions by government and state agencies are supposed to follow strict rules issued by the US Fish and Wildlife Service (though there are several troubling incidents that are currently being investigated including famous park bear 760’s death). A recent article by Mike Koshmrl of the Jackson Hole News and Guide also highlights how many grizzlies die each year at the hands of people even with the added protection of the Endangered Species Act still in place. (Read full artice here:)

The story of the grizzly bear in Wyoming is a long and hallowed tale, one that is certainly too long and nuanced to tell here. Due to trapping, hunting and poisoning of grizzlies across the west, populations of this great bear were decimated. One of the last remaining populations to hang on in the lower 48 was in the remote backcountry of Yellowstone National Park. It was here, in these wildest of protected lands in Northwest Wyoming that under 200 grizzlies remained to remind us all of what once was.

From this remnant population the grizzly bear began to recover. With the added help of being listed as threatened under the ESA and the reintroduction of wolves into the Greater Yellowstone Eco-system, the grizzlies started to thrive. Their population and range increased to a level that today many consider to be ‘recovered’. The debate over whether or not they are ‘recovered’ hinges on several factors not the least of which is the current population. A great question would be ‘how many grizzlies are currently roaming the GYE?’ to which an honest answer is ‘nobody really knows!’. Some estimates put the population as low as 500 and as high as 1200. Even the most knowledgable bear experts don’t agree. Determining the exact population of an animal that roams over hundreds of square miles and is nicknamed the ‘ghost bear’ is more art than science to be sure. In addition to not knowing the exact population, the limited habitat available to grizzlies today combined with the pressure on their population due to human mortality necessitates caution when making broad policy decisions that will significantly impact their current population.

Unfortunately, we live in a world that is many shades of grey but managed in black and white. Currently grizzlies have protection under the ESA therefore there is no trophy hunting and any killing of a grizzly must occur under very strict circumstances (at least on paper). If grizzlies are determined to be ‘recovered’ then they will lose their ESA protection and immediately be considered a trophy animal by the state of Wyoming’s game and fish department. In practical terms this means that grizzlies will be immediately hunted and killed throughout Wyoming. Since grizzly 399 is known to hibernate outside the boundary of Grand Teton National Park and travels there during hunting season, she is likely to be one of the first grizzlies killed. She has become habituated to people over the years and is attracted to gut piles left by elk hunters along the park boundary (though most likely grizzly bear hunters would be allowed to bait grizzlies as is common practice among black bear hunters – a non-fair chase strategy that definitely deserves discussion!). Some would be grizzly hunters have even been vocal about wanting to kill 399!

Think about how insane this system is. We spend millions of dollars of taxpayer money to rehabilitate an endangered animal only to allow each state to then auction off the right to kill the same animals! On top of that the cost of facilitating this massacre is once again subsidized by taxpayers as these kinds of hunts lose money for the state game agencies. Wyoming lost about 500k a year facilitating the wolf hunt that was finally shut down once again by the federal government. On top of all that we lost a multi-million dollar wolf watching industry that could be alive in Jackson Hole but since these hunts the wolves have remained elusive and out of sight. My experience is that even more people come to Jackson Hole and the Greater Yellowstone Area to grizzlies! How much revenue will be lost and how many jobs lost when visitors to Grand Teton will no longer get to see grizzlies because they are either hiding from people or hanging on someone’s mantle collecting dust? Is it worth it?

The best way to stop this tragedy is to be heard! Firstly contact your local, state and federal representatives and let them know how you feel about grizzly bears and why they are more valuable alive than dead. Second try to attend and voice your concerns about de-listing grizzlies from their threatened status to the Interagency Grizzly Bear Committee (IGBC) which is scheduled to meet November 3rd and 4th at Hotel Terra in Jackson Hole. The IGBC has recommended to the USFWS to remove protection for the Wyoming grizzly and give control of bear management to the state. If so, the Wyoming Game and Fish will most certainly decide to allow trophy hunting of grizzly bears. We need to make sure these policy makers know the consequences of their decisions. We need to let them know that we prefer our grizzly bears alive and that they are not only intrinsically valuable alive but also economically valuable. These are the stars of the charismatic mega-fauna show that people from all over the world come to see! We don’t want the grizzly to suffer the same fate as the wolves where they are hunted right along the park boundaries thus reducing our opportunities to experience these awesome animals in the wild.

Let’s not let bear 399 and her family become the next Cecil the lion!

ACTIONS TO TAKE:
Call or email the people below and demand more time for public comment. Mobilize your friends to attend, the more people who attend the bigger impact we can have. Prepare remarks for the meeting and speak up. Put this important meeting on your calendar and BE THERE!
• Mary Erickson, committee chair: 406-587-6949. mcerickson@fs.fed.us
• Chris Servheen, US Fish and Wildlife Service: 406-243-4903. grizz@umontana.edu
• Frank Van Manen, US Geological Survey: 406-994-5043. fvanmanen@usgs.gov
• IGBC office: 406-329-3434. igbc@igbconline.org
————–
LOCATION AND TIME
Hotel Terra, Teton Village, WY  – November 3rd from 1PM to 5PM –  November 4th from 8AM to Noon
Meeting Schedule:
http://www.igbconline.org/images/pdf/151103_YES_Fall_Agenda.pdf