Home Blog See the bighorn sheep of Jackson Hole before they head to the highcountry!

See the bighorn sheep of Jackson Hole before they head to the highcountry! 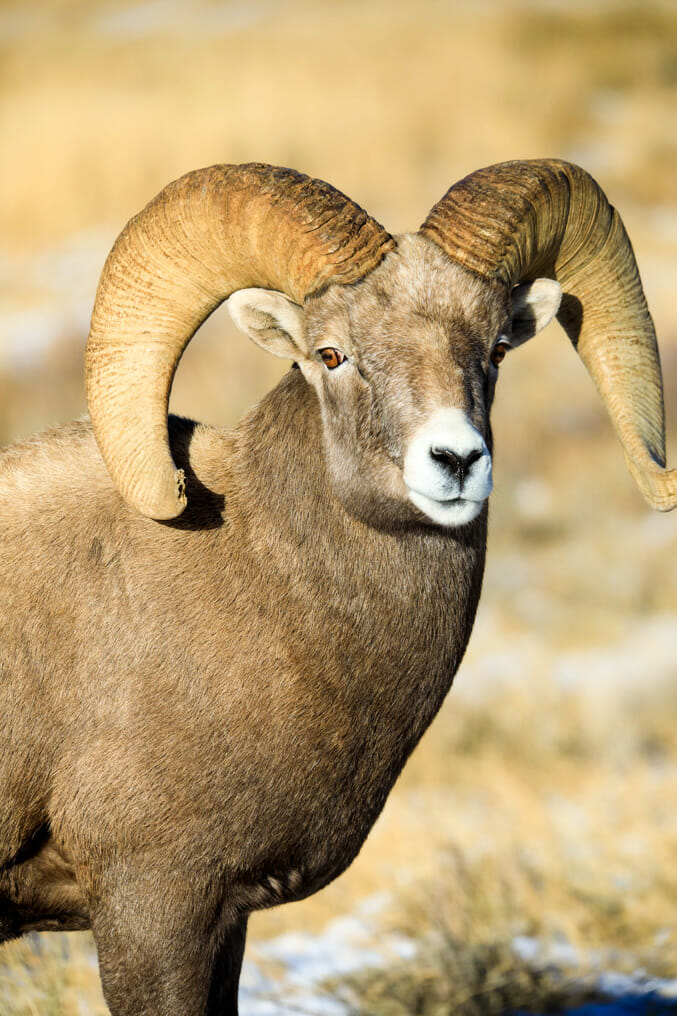 Every year a group of bighorn sheep descend the rocky ridges and forested slopes of the Gros Ventre mountains to spend the winter grazing on the mostly snow free slopes of Miller Butte on the National Elk Refuge. Situated in the southern half of Jackson Hole in Northwest Wyoming in the rain shadow of the Grand Tetons, this high desert butte receives significantly less snow than their summer range in the high country that forms the east side of Jackson Hole. One of their summer mountains is even named after them – Sheep Mountain – often referred to as the Sleeping Indian because of it’s likeness to a native chief laying on his back. If you ride the tram or are skiing out at Jackson Hole Mountain Resort and look east you can’t miss the similarity.

The sheep have followed this same path for hundreds of years, maybe even thousands, in search of winter nutrition and a milder climate – that is if you consider 20-30 below zero mild! They use the rocky outcrops for protection against the numerous predators that stalk Jackson Hole including wolves, cougar and coyote. Their superior balance and agility combined with padded hooves and outstanding agility make them a hard target for even the most cunning predator, especially when they are in their element. Steep cliffs, loose rocks and dizzying heights that would intimidate even the most talented rock climbers are just another day in paradise for these natural born climbers. They will jump, scramble, climb and almost fly from ledge to ledge and precarious perch to almost nothing. Standing in vertical positions with their shoulders touching the rock, they will look almost board and find time to nibble on a lone piece of grass sticking from a crack or sometimes even close their eyes and take a nap!

Their hooves are concave with a softer center allowing them to be excellent climbers. They can also run, jump and swim confidently giving them a range of options when escaping predation or migrating. Though millions once lived in the West, their numbers have been decimated by market hunting in the 1800’s. Today they are still under pressure from habitat loss, disease, and hunting.

Rams can weigh up to 300 lbs and ewes up to 200 lbs. Though both sexes have horns the Rams’ horns  will begin to curl after a couple years growing to a full curl by age seven. A mature ram can have horns that weigh up to 40 lbs.! During the rut in November the rams will battle for the right to mate by ramming into their competitor’s horns as hard as possible. They will stand on hind legs and charge to gain as much momentum as possible. Their thick skulls protect them from brain damage but their horns are frequently damaged during these exchanges. After mating the rams will live apart from the ewes in either alone or in small groups. The ewes give birth in May or June to one or two lambs and will travel together in herds of up to 20 with larger herd possible in winter. Though Bighorn Sheep spend most of their time in the high country, they do come down to their winter ranges in the valleys part of the year.

That is why now is a great time to get your last glimpses of these amazing animals before they once again ascend into the Gros Ventre Range for another quiet summer looking down on the chaos of summer in Jackson Hole. The National Elk Refuge is a great place to watch bighorn sheep as they will regularly come right down to the road in search of salt and minerals on the road. There is also a herd of sheep in the Hoback Canyon that will often cross the road near Camp Creek to the Hoback River for water. There is also a small herd that spends the entire winter hunkered down in the high country of the Tetons. Their migratory routes and winter habitat was disrupted by human settlement and development in Jackson Hole over the last hundred years. Now they sit stoically near the summits of windblown craggy peaks getting by on a lean diet of year old alpine vegetation.

Another great place to see bighorn sheep, even later into the summer, is the Lamar Valley in Yellowstone National Park. Watch for them around the confluence of Soda Butte Creek and the Lamar River. Remember to look high on the ridges as you will often see them on the very top of some of the biggest steepest cliffs towering over the valley.

Our winter wildlife safari tours and our Grizzly and Wolf and Top of the World Safaris are great trips to join us on if you are interested in finding bighorns in the Greater Yellowstone Area.