Mountain bluebirds mark the return of spring to Jackson Hole! 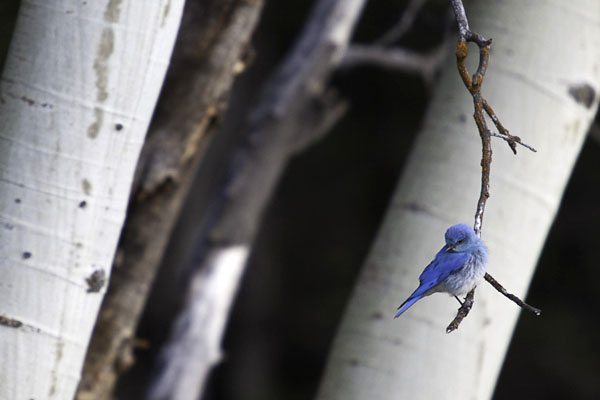 On March 21st we officially stepped into spring when the earth reached it’s bi-annual equinox where the sun is perpendicular to the the equator. During most of the year the earth is slightly off axis in relation to the sun and looks like a wobbly top dancing back and forth, about to tip over. Lucky for us we haven’t fallen over yet and each year the top that is our planet predictably rocks back and forth to create the seasons we enjoy throughout our ‘earth’ year.

Though all of us recognize the spring equinox as the calendar’s official end of winter, most of us have other events that more meaningfully welcome spring each year. For some it is the warming temperature and melting snow. For others it might be the first blades of green grass appearing in the yard. For me it is the return of the mountain bluebird to Jackson Hole. This year I saw my first one on March 20th but given the time I spend working in the office these days I am sure they arrived even sooner.

Though I certainly enjoy the thaw of winter and warmth of the sun as it climbs higher in the sky, I especially look forward to seeing the unmistakeable deep blue of their feathers contrasted against the stark, monochromatic landscape. Their song too is a welcome change from the calls of the few birds that actually overwinter in western Wyoming.

Mountain bluebirds are one of the first song birds to reappear each year due the advantage that an early arrival can have on choosing nesting sites. Bluebirds nest in small cavities in trees, small cliffs and artificial nesting boxes that can be in short supply, especially a site that is oriented to best avoid increment weather, predation and a place the might have have already used and developed. They will often return to the same nests each year when possible with the nesting materials accumulating year after year to the point of almost overflowing. This can go on for years as the oldest recorded bluebird, according to the Cornell Lab of Ornithology, is 9 years!

Some will appear and stay in Jackson Hole for the summer while others may continue further north into Canada to nest. In either case their annual migration covers thousands of miles, over several mountain ranges and, in some cases, several countries. After they nest in the spring and the young have fledged, they will begin to form small flocks which you will see hunting and traveling together later in the summer in Jackson Hole. One of the best places to see them during this time is the open fields and grass land at Elk Ranch and Antelope Flats. There are often several occupied nests around Mormon Row, especially the northern homestead with the pink house and the Moose Wilson Road.

During nesting it is important not to approach too closely as it is possible to disrupt them to the point of them abandoning their eggs or young. By keeping a respectable distance you should be able to watch them come and go from the nest with food as they take turn hunting and foraging. They will actively hunt from ground to eye level making them a fun bird to watch as they rarely sit still for too long.

This is by far my favorite season. The world comes alive and smells fresh with the promise of new life with newborn calves, cubs and chicks seeing the world for the first time. Buds turn to leaves, sprouts to flowers and the cacophony of life into opportunities for members of the ecosystem at all levels, including us.

If you are interested in getting our there this spring and learning more about the Greater Yellowstone area and/or wildlife photography check out some of the great spring itineraries we are offering this year. New for 2014 is our 5 day Spring Photography Workshop in Grand Teton and Yellowstone National Parks and a new 3-day Grizzly and Wolf Safari!

Spring in the Tetons