Home Blog Grizzly 610 and her cubs are alive and well in Jackson Hole!

Grizzly 610 and her cubs are alive and well in Jackson Hole! 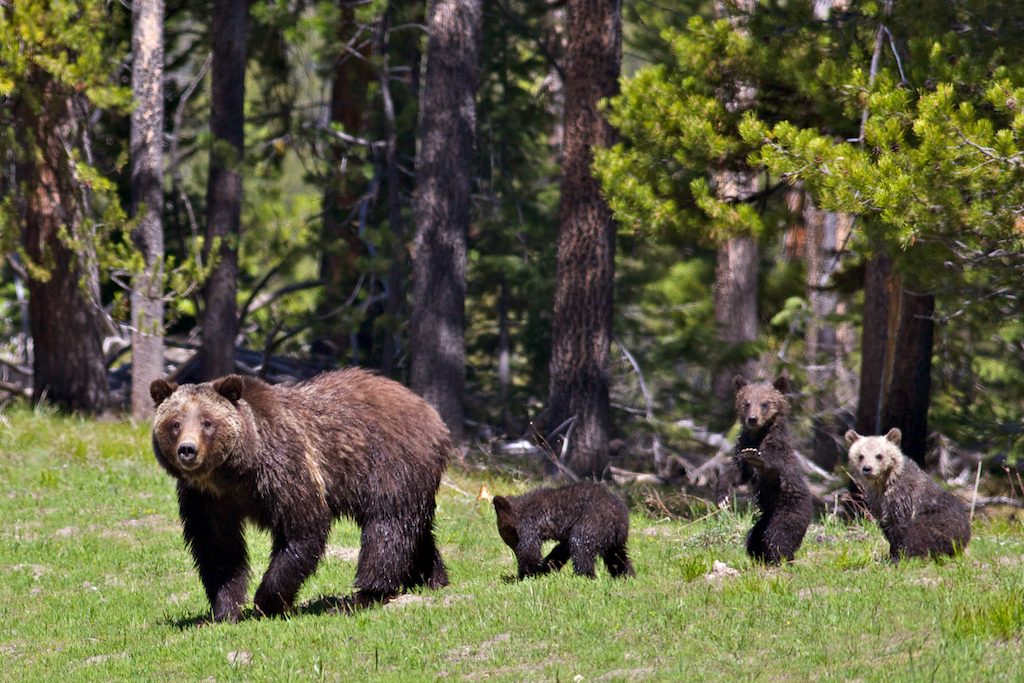 The most famous Grizzlies in Jackson Hole and maybe the world have finally emerged from their dens and made their 2013 debut in Jackson Hole. The sow Grizzly, numbered by park biologists ‘610’, is the daughter of sow grizzly 399. Bear 399 became famous in Jackson Hole a few years back when she raised 610 and her siblings along the roadsides of Grand Teton National Park. She was the first grizzly bear in Jackson Hole to really master living closer to roads and people, taking advantage of great habitat devoid of other bears and thus competition for resources. Bears in Yellowstone had learned this secret long ago but the bears that found Jackson Hole in the late 1990’s tended to be shy backcountry bears used to living in some of the most remote terrain in the United States.

Bear 399 gave birth to 3 cubs in the winter of 2006 while still hibernating in her remote den in the Teton Wilderness. That spring kicked off Grand Teton National Park as one of the great grizzly viewing parks in the world. Bear 399 and her 3 newborns put on quite a show and quickly learned where to find fresh veggies and newborn elk calves. They played, grazed, hunted and lounged around to the delight of millions of visitors. As each year passed the 3 cubs got bigger until they finally broke off on their own a couple years later. The young male of the three started to get into trouble and was captured and moved into a remote area south of Yellowstone National Park. The remaining two could be seen later that summer playing together along the roads and working together as a team until they were confident to leave each other for the fully solitary life of an adult grizzly.

One of those bears was 610 and little did anyone know then that she would take over her mother’s mantle as the queen of roadside grizzlies in Grand Teton National Park. The next year she would successfully mate and then give birth the following winter to her own newborn cubs. It is not uncommon for female grizzlies to either share or take over their mother’s home range and that is exactly what 610 did. They frequently encounter each other and after a brief scuffle over territory in 2011, bear 610 ended up adopting one of her mother’s yearling cubs. Though it is not known why and isn’t something really known to happen, many in the wildlife patching and photography community think that it was probably because bear 610 is larger and was given some of the best of 399’s old territory. This is pure speculation but I am one of those that believes that other animals are a lot more smart, understanding and capable than we give them credit for.

The encounters I have seen between 399 and the adult 610 has been respectful and relatively non-violent, though to the human eye it is easy to mistake the benign communication and play of bears as aggression. In fact bears are surprisingly gentle to one another. Given they could easily cause significant damage to each other, they rarely do.

The re-emergence of grizzlies in Jackson Hole is the official kick-off of the summer wildlife season for those of us lucky enough to call Jackson Hole home. While most people use calendars and well established solar measurements to determine the seasons, wildlife photographers and naturalists tend to use different natural events to determine the passing of one season into another. The return of certain songbirds, the emergence of a specific spring flower or for those of us with a bear fetish, spring is official when sow grizzlies with new cubs begin to emerge from their dens.

Remember that this time of year is probably their hardest time to find enough food and they have just emerged from hibernation after months of sleep. Like a human waking after a long slumber, they might be grumpy, hungry and not in a very social mood. Give them plenty of space, be aware of bear sign and carry bear spray if you are out hiking or skiing in the Greater Yellowstone Area. This is an easy time to have a surprise encounter with a sow and newborn cubs, one of the most likely encounters that could lead to a grizzly to charge and actually make contact. Make noise when approaching an area of dense vegetation and keep your eyes peeled for fresh bear sign. Tracks leading into a stand of trees or a creek bottom choked with willows should be a red flag. In addition, never approach a dead animal, even an old carcass as it is not uncommon for a bear to feed on a kill and then rest off to the side in the shade of a tree. A bear defending a kill is another likely scenario for them to make contact.

If you would like to see the grizzlies of Jackson Hole and Grand Teton National Park give us a call at 307.690.6402 to join one of our wildlife safaris in Jackson Hole, Grand Teton or Yellowstone National Parks. Check out our multi-day itineraries as well including our Grizzly and Wolf Safari or our Top of the World Safari. These two tours will spend the most time in prime grizzly bear habitat and give you countless opportunities to see these awesome animals in the wild.