Home Blog From the Field: Wildlife in Jackson Hole and Yellowstone (Week of May 25th, 2015)

From the Field: Wildlife in Jackson Hole and Yellowstone (Week of May 25th, 2015) 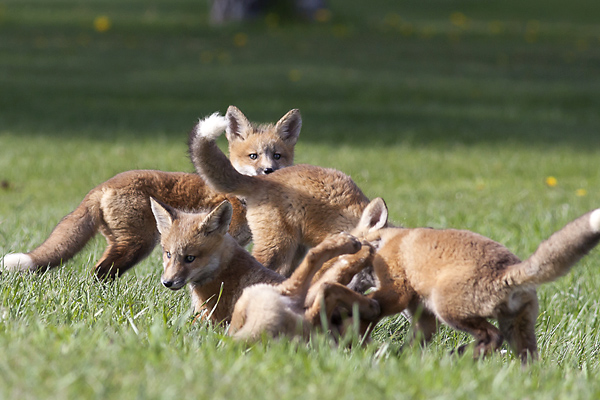 Spring is in full force here in Jackson Hole and the Greater Yellowstone Ecosystem with bright green foliage, migrating song birds, early wildflowers and most importantly abundant and super active wildlife. As the animals move from their winter ranges and disperse over the landscape in search of fresh forage they are followed by the predators who are sustained by them. Grizzlies and black bears roam the landscape in search of fresh vegetation and unwitting prey while wolves continue their pursuit of the animals that they rely on like elk, deer and the occasional small mammal. Birds from as far away as South and Central America also begin to arrive from their long pilgrimage as species that wintered here move back north to their favorite summer nesting grounds.

With all of this action comes great opportunities to watch, study and photograph just about every wild animal that lives in the Greater Yellowstone Ecosystem. Our recent trips have been returning with seemingly fictitious stories of dozens of brown bears, wolves and black bears seen in only a few days in the field! Thousands of elk and bison roaming the landscape, nesting great horned owls, great grey owls hunting mice right at our feet and migratory birds like the mountain blue bird, western meadowlark and yellow warblers flitting about and singing to each other adding that auditory pleasure that really says spring is here.

The grizzly bear might just be the most sought after animal in the area and can also be one of the hardest to find. In Grand Teton National Park you want to focus your attention from Moran Junction out to the Jackson Lake Dam and north to about Leeks Marina Junction. These are the most favored spring haunts of Jackson Hole’s most famous bears including the matriarch sow of the valley bear 399 and her now mature daughter 610. This year 399 appeared from hibernation early with her two year old cubs who were kicked out onto their own by mid-may. Grizzly 610 appeared with two new cubs of the year, or COY, and has been on the move looking for food and doing her best to avoid male grizzlies who might threaten her young cubs.

A special surprise was the arrival of one of my favorite grizzlies known affectionately as Blondie. She is with her three yearling cubs, thought by most to be her first offspring. Many bear enthusiasts thought Blondie might have met a terrible fate as she didn’t appear at all last year. Now, in hindsight, we now know she was raising her new cubs away from the busy roads and bear filled meadows that she usually frequented.

In Yellowstone keep your eyes peeled from Fishing Bridge to about Steamboat point on the East side of the park and in Hayden and Lamar valleys as well. There has been a lot of action and dozens of grizzlies in those areas.

The black bears have also been really active this year with sightings of several bears throughout Jackson Hole. The Signal Mountain Lodge area over to the dam is a great place to start looking as there have been bears on both the lake and hill sides of the road over the last couple weeks. There has also been a couple big boar black bears in the Pilgrim Creek area and around Colter Bay in Grand Teton. In Yellowstone there has been reported black bear sightings park wide but a particular highlight for some has been a sow with cubs in the Tower area.

The wolves have been active in both national parks but as usual the northern part of Yellowstone is the most consistent place to find wolves in the region. The Northeast side of Yellowstone including the Lamar Valley, one of the world’s best wolf watching locations, has been on fire this spring. Watch for people with a lot of scopes and gear and, if you are quiet and respectfully ask what they see, they will most likely share a lot of information and peek in their scope.

A few more wildlife sightings of note include a pair of great grey owls that have been hunting each day in the meadows on the North end of the Moose-Wilson road in Grand Teton National Park, a couple moose (including one with twin calves) in the river bottom by the Moose Bridge and a great horned owl nest at Mammoth right next to the visitor center. Oh yeah and don’t miss the coyote den with pups out at Mormon Row – their den is under one of the barns and is visible from the road.

Remember to keep a safe and respectful distance from all wildlife, especially predators, nests, dens and any mother with young. The park rules stipulate you stay at least 25 yards from all wildlife and a minimum of 100 yards from bears and wolves. If you change an animals behavior, especially to the point of fleeing you have approached too close. It may not seem like a big deal but it is important to remember that you are probably not the first person to encounter this animal and they may have been disturbed dozens of times that day already.

I hope this helps! Happy hunting (with a camera).