Home Blog From the field: Current wildlife sightings and other observations in Jackson Hole (Week of Jan 15, 2015)

From the field: Current wildlife sightings and other observations in Jackson Hole (Week of Jan 15, 2015) 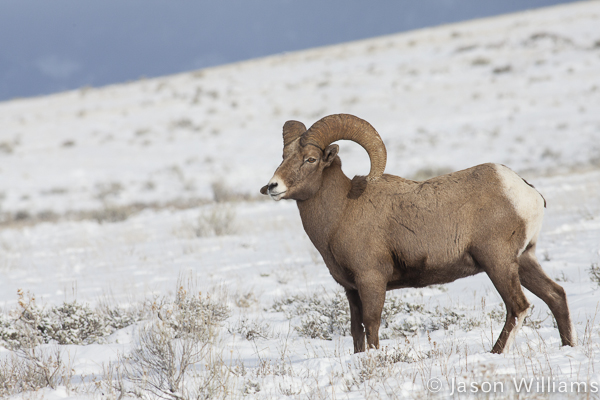 It’s been a busy wildlife winter so far with a lot of current events to report! All of the usual suspects have been cooperative and living their lives as usual in Jackson Hole. If you don’t want to leave town look up onto East Gros Ventre Butte (the big hill on the west side of town) and you will most likely see mule deer and probably some elk, eagles and maybe even a moose. Watch out in people’s yards and in any open space as well. Karns Meadow in the middle of town is also filled with wildlife if you happen to be walking nearby.

If you travel around to the backside of the National Elk Refuge you can find the herds of bighorn sheep, scattered herds of elk (make sure to look to the uphill side of the road as well as there have been several small herds taking refuge along the treeline), a ton of eagles (both golden and bald eagles are common), coyotes, pronghorn and there have even been a pack of wolves spotted hunting on and around Miller Butte as well (see below for official National Elk Refuge update).

The large herd of pronghorn that are wintering on the refuge this year are worth a mention. Most pronghorn migrate out of Jackson Hole every year and in the past have rarely survived the winter. They are not as adapted to traveling through deep snow and having to dig down to their forage. A small group that stayed a couple years ago did survive but the winter was pretty mild with valley snow melting off periodically allowing them enough room to roam and find enough nutrition to survive. This year will certainly be interesting for them because the early snows followed by a melting then hard freeze has created a very hard snowpack to dig through. The benefit for them in the southern part of the refuge is the lighter snow and overall warmer temps created by the micro-climates along Miller Butte and the rain shadow created by the Tetons to the west. It is fun to watch them interact with the bighorn sheep as the two species don’t often spend a lot of time together. Bighorn sheep tend to like steep rocky terrain most of the year while pronghorn are adapted to surviving in open plains and large meadows where they can easily see and flee from predators. They are super fast too being able to reach speeds of near 70 miles per hour and in a long distance race could even outrun a Cheetah! 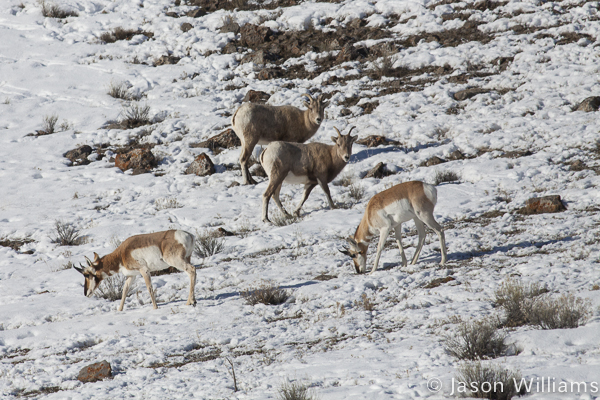 Bighorn sheep curiously watching the pronghorn as they graze past. Photo by Jason Williams

Another interesting event from a couple weeks ago was a small group of bison that started moving to the far southern end of the refuge. Due to concerns about the bison coming into town and other potential conflicts the managers decided it best to move them back their normal winter stomping grounds. Though this kind of management can be controversial, the thought of a herd of bison stomping around through town wasn’t the kind of Merry Christmas the town of Jackson was looking for. A herd of elk, random moose, wandering deer are largely tolerated but the bison present a whole different set of problems! This photo was taken by JHWS guide Jody just before they were moved by refuge staff.

Though we don’t have any images of the most recent wolf sightings here is an update from the National Elk Refuge on the wolves and other wildlife news within the refuge:

Wolf activity has increased on southern NER in recent days with many observations of wolves in the Miller Butte area.  One group of 4 black and 2 gray wolves were observed on 1/14/15 chasing bighorn sheep. An unknown number of wolves were observed chasing pronghorn west of the Miller house the same day.  We have documented that wolves have killed at least 2 elk in recent days.  Based on the number of black wolves observed either the composition of the Pinnacle Peak Pack has changed, or there is a different wolf pack using NER.  We will  try to confirm what is going on based on wolf collar data in the coming days.

WGFD biologist Aly Courtemanch and I evaluated snow and forage conditions on 1/12/15, and we found that average available forage at key index sites had declined to 422 lbs. per acre compared to 665 lbs. per acre measured on 1/6/15.   Average snow depth at index sites was 6 inches.  This year it was forage consumption rates influenced by relatively high numbers of elk and bison using NER during the late fall and early winter period that had the greatest influence on the decline in available forage.  Based on this information Refuge manager Steve Kallin and WGFD manager Tim Fuchs determined that the first day of supplemental feeding will be Monday, January 19th.

Technician Tim Pratt and I concurrently counted all ungulate species within the standard NER survey area on 1/14/15.  Our standard survey area is the 11,400 acre southern portion of NER south of the Gros Ventre Hills.  Concurrent, independent counts by 2 or more experienced observers are useful because they allow estimation of the mean number of animals and associated confidence intervals for the estimates.