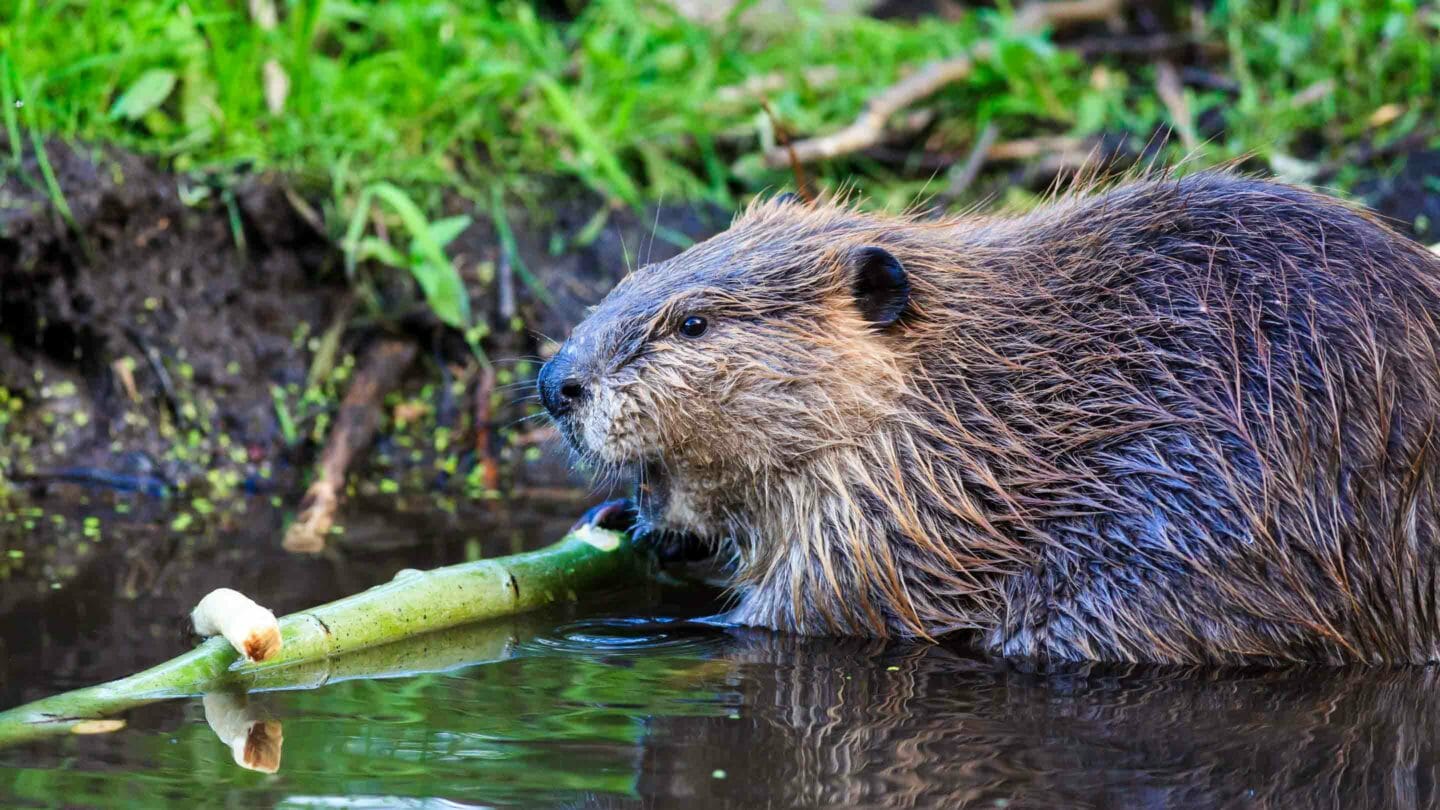 There is an unlikely family of celebrities in Jackson Hole entertaining visitors this summer and the performance is included with your Grand Teton National Park entrance fee. Traveling along park roads it is quite common to find yourself in a wildlife jam often caused by the larger fauna like moose, elk, bison and bears but some of the largest traffic jams and wildlife enthusiasm of the summer have been caused by Castor canadensis – the American Beaver.

Along the Moose-Wilson road, a couple miles south of Moose, Wyoming, watch on your left for a marshy area that turns into a pond within 100 yards (make sure not to stop at ‘Sawmill’ pond which is the first pond you will come to on the left – though you should stay focused for the moose and Great Grey owls that regularly hang out there!). The pond is created by an elaborately built dam spanning the entire south side. Built out of mud, branches and logs the dam blocks up the stream creating a stable body of water for the beaver to live in. In the middle of the pond you will see a huge, pyramidal pile of sticks and if you look closely the carefully intertwined gnawed branches will give away the skillful design of their lodge. This den or ‘lodge’ houses the entire family of beaver responsible for the series of dams that have blocked up the stream creating the pond they live in as well as the wetland behind it.

Beaver are one of the largest members of the rodent family and can weigh up to 100lbs. They are incredible swimmers and use their ability to be underwater for up to 15 minutes to avoid predators. As a matter of fact the reason they build lodges in calm water or live in dens underneath the banks of waterways is so that they can swim in and out of their dens safely avoiding many would be predators.

Beaver are herbivorous and, contrary to popular belief, don’t eat fish. They will eat a variety of plants especially bottomland deciduous plants and trees. The reason they down larger trees is both for dam and lodge building materials and for food. They will eat the bark of some trees and the cambium layer of the tree just underneath the bark. That pulpy ‘living’ layer of the tree is a prime source of nutrition and the reason you see the branches and trunks of trees felled by beaver to have scrape marks down the entire length. Willows, Aspen, and Cottonwood are the most common targets of Beaver in this area; however it is not impossible to see them cut down conifers if they need building material.

The Beaver pelt was the most sought after and traded fur by the early European explorers. The native americans used Beaver fur for clothing to stay warm but the Europeans had a much more lucrative market for the pelts back in the old world. The pelts would be processed to make felt for a variety of hats including the the classic top hats worn by gentleman throughout western Europe. The hat making process involved separating out the coarse guard hairs from the softer hair underneath then boiled down to create a workable material that could be pressed into shape to form a variety of hats. One of the chemicals used in this process was Mercury, which would often lead the hatters to get poisoned from the fumes emanating from the vats. One of the affects of Mercury poisoning is erratic behavior, mood swings and trembling which is the basis for the saying ‘mad as a hatter’ and probably the foundation for the Mad Hatter character in Alice in Wonderland.

This lucrative industry penetrated deep into the North American wilderness with native American tribes trading with early explorers for everything from trinkets to metal tools, firearms and alcohol. In 1803 Thomas Jefferson negotiated the purchase of a large area of land claimed by the French west of the Mississippi River. Known as the Louisiana Purchase this largely unmapped and unexplored land needed to be claimed, mapped and explored hence the need for an American expedition into this largely uncharted wilderness. The Lewis and Clark Expedition left St. Louis in May of 1804 with several missions, one of which was to establish a network of trade with the native inhabitants in order to gain control over more furs coming out of the American interior.

After Lewis and Clark made it back to the confluence of the Missouri and Yellowstone rivers, one of their expedition hunters, John Colter, made his way back up the Yellowstone river to explore the headwaters in search of untapped beaver habitat. This journey brought him into the large mountain valley now called Jackson Hole, which would in the following years be named after a fellow trapper, Davey Jackson. John Colter’s travels were widely reported and brought more trappers into once unexplored watersheds in search of the valuable pelts including into the headwaters of the Snake River and side streams of the Teton Range.

The insatiable appetite for beaver fur in Europe lead to gross over harvesting and decimated beaver populations to near extinction in North America. The disappearance of beaver in western watersheds lead to a classic trophic cascade that would only be understood over a century later with the advent of ecology. We know now that what is viewed by some as destruction by the beaver actually has a significant influence on the creation of important habitat for a variety of plants, animals, insects and fish.

When Beaver build dams they slow down the current, flood the land upstream and cut down mature trees for food and material allowing sunlight to penetrate to the ground. This allows a variety of ground plants to grow where they would have otherwise been unable to grow due to lack of sunlight. When the beaver eventually abandon the area the dams will break down leaving behind a lush bottomland meadow and a much more diverse habitat than a mature forest. Without the beaver the trees will eventually move into the meadows, the roots will strengthen the stream banks leading to lower quality fish and bird habitat. In addition the shade from the canopy will disallow sunlight from supporting as much ground vegetation hence less forage for grazing animals like deer, moose, elk and bears.

This is a classic trophic cascade. Fortunately for the beaver and the bottomland species that rely on their work, chinese silk replaced the beaver pelt hats as the material of choice in the mid 1800’s. The fur trade collapsed due to a lack of demand and the beaver once again began to repopulate watersheds where they were trapped out of existence. Today you will see the tell tale signs of beaver habitation in most western watersheds. Since beaver are nocturnal they are best viewed in the evening as they come out to collect food, shore up their dams and patrol their territories.

As summer turns to fall they will become more active collecting food for winter, especially if their lodges and ponds will be under several feet of snow. At this time of year they will be more active during the mornings as the workload increases in preparation for winter. They will begin to store branches underneath the water in the mud where they will be accessible under the ice covering their pond. Since their living quarters in the lodge are well above the water line they only have to enter the water to collect their stored food and break the monotony of a long winter under snow. Some beaver, if they can access the surface might even move across the snow and begin to work on trees leaving beaver chewed areas several feet off the ground.

The beaver along the Moose-Wilson road have become habituated to the presence of people and might even benefit from the attention by deterring predators from sneaking up on them. Look on the opposite side of the road and you will see several trees and shrubs that have been cut down and dragged to their various work stations in the water. Though they are a relatively safe animal to watch it is always best to give them a little space and not force them to move or change position just to get a better picture. If you are calm, quiet and move slowly and respectfully, they will probably swim right up to you and give you a great show on their own terms. Enjoy!