Home Blog Where are the bears of Yellowstone, Grand Teton and Jackson Hole?

Where are the bears of Yellowstone, Grand Teton and Jackson Hole? 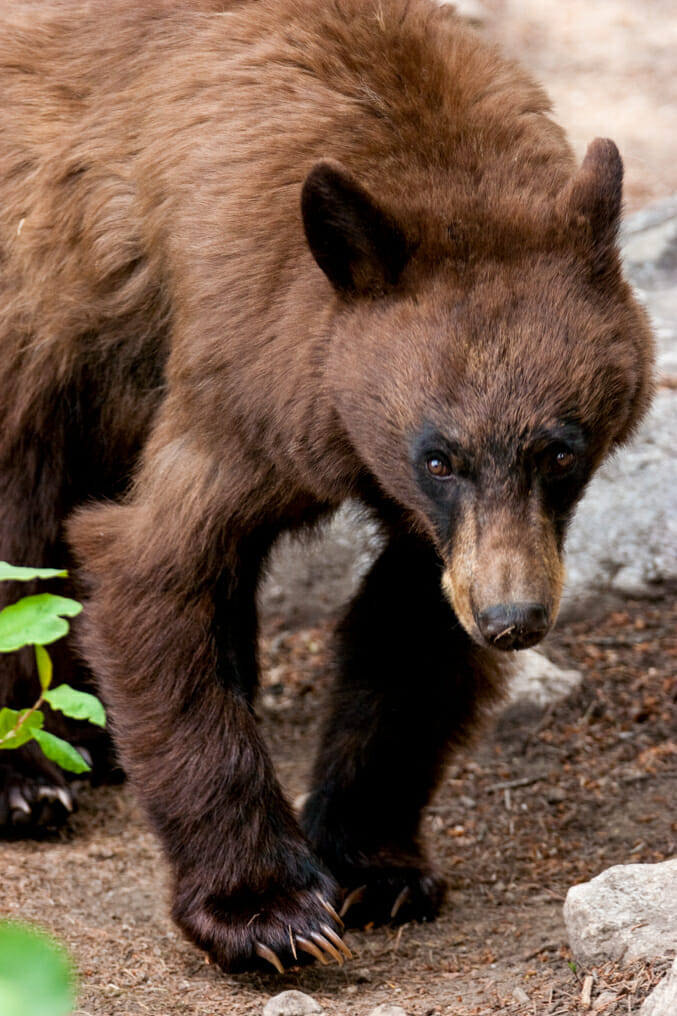 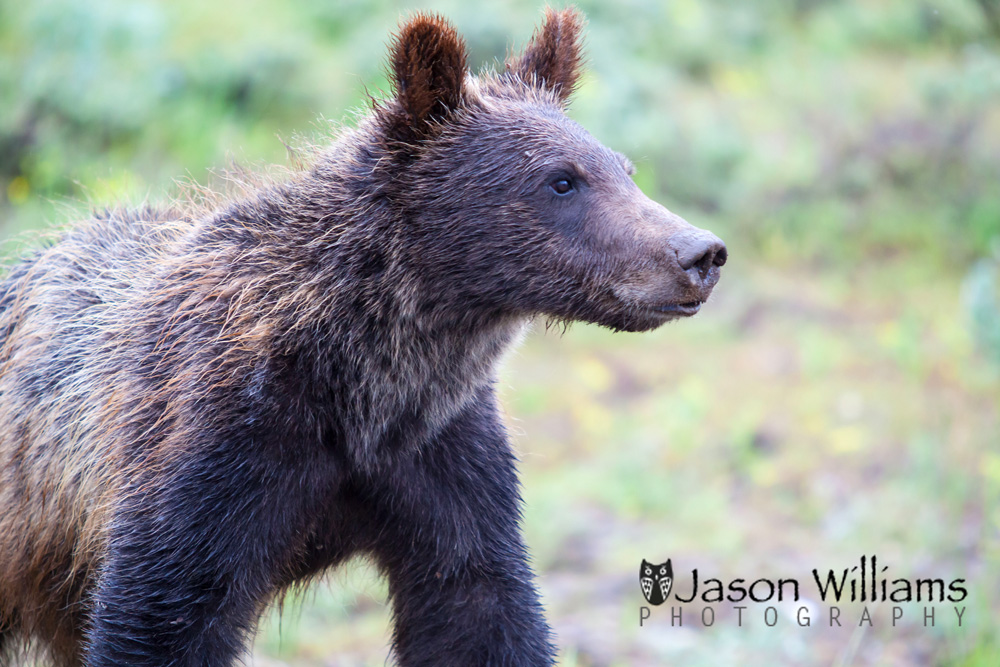 It’s mid-February and most of the Greater Yellowstone Ecosystem is blanketed by several feet of snow and temperatures that regularly fall below zero. The high country is especially brutal with the deepest accumulation, highest winds and coldest temps. Ironically it is here that one of my favorite animals, the Grizzly bear, chooses to spend the winter hibernating in carefully selected and well built dens. As I sit in my own den wishing I too could hibernate for the winter, my imagination begins to take flight over the high peaks of the region in search of one of the more than 900-1000 Grizzlies sleeping beneath the snow.

Grizzlies in the Greater Yellowstone Ecosystem

Most grizzlies in the Greater Yellowstone Ecosystem (GYE) will look for north facing slopes between 7-10 thousand feet above sea level to dig their dens. The lack of sunlight on the north faces and the increased snow loads at elevation provide grizzlies with plenty of snow to insulate their dens and keep the ground from freezing very deep. Since the earth is constantly radiating heat, the surface of the ground typically stays right at 32 degrees Fahrenheit, especially when several feet of snow insulates the ground from losing heat to space (known as radiative heat loss). Add to the mix the additional insulation of the soil and a several hundred pound bruin also radiating heat into the den and you get a nice cozy winter bed. When Grizzlies are awake they have a body temperature of 100 degrees F but when they hibernate that drops to around 90. The inside of a Grizzly den can be nearly as warm as their hibernating body temperature! During hibernation bears experience a decrease in heart rate, respiratory rate, temperature and they won’t defecate, urinate, drink or feed until they come out of their dens in the spring. The only exception is if they catch the scent of nearby food, like a winter or wolf killed animal, in which case they sometimes wake temporarily to feed. It is definitely unnerving when you are skiing or snowshoeing in the backcountry and come across fresh Grizzly tracks in the snow.

Most bears will begin hibernating from November through December and typically wake up from early March through April. Boars, or males, will frequently enter hibernation later and wake earlier than sows, or female bears. This is especially true if the sow has cubs of the year or sub-adults with her or if she is pregnant. Sows that are pregnant going into hibernation will give birth in their dens in late January through February to 1-3 cubs. The cubs are born almost hairless and totally blind. They will suckle the hibernating sow for the rest of the winter until she wakes in the spring. When they emerge from the den the cubs have hair, they can see, they can walk and they can even run, albeit with the clumsiness of a toddler. This is a particularly vulnerable time for the cubs as they are virtually defenseless from all other predators and will sometimes be targeted by boars hoping to trigger the sow into estrus by killing the cubs. Cubs will usually stay with the sow for two years after which she will kick them out and mate again during the second spring. Sow cubs will tend to stay closer to her mother’s home range but boars will range out looking for a new territory. Consequently, sub-adult boars tend to create most of the problems between people and Grizzlies.

The Lifecycle of the Grizzly

One of the most amazing adaptations in the life cycle of the grizzly is the process of delayed implantation. Though fertilization occurs during mating from May through July, the embryo does not immediately develop by not implanting on the uterine wall which gives the sow an opportunity to put on weight for hibernation. If she is healthy enough, the fertilized egg will implant on the utterer wall and the embryo will begin to develop during hibernation. If the sow goes into hibernation without enough stored fat or in otherwise bad shape she will abort the egg automatically so she can survive the winter. This prevents a pregnant sow from investing too much biological effort into the reproductive cycle during a nutritionally lean year.

Grizzlies, scientifically called Ursus arctos horribilis or ‘horrible brown bear’, are widely thought of as fierce, dangerous and mean but that is largely untrue. My encounters with these magnificent animals have ranged from them being ambivalent to my presence to them being shy and hiding before I even catch a glimpse of them (hence their common nickname ‘the ghost bear’). This is not to say caution is in order. Any animal that can run 40 mph, has teeth made for tearing flesh and razor sharp claws should be treated with utmost respect and given a wide berth. My experience has taught me that bears, along with all other animals I have tracked and photographed, are individuals with a wide variation in personality. Some are curious, some are shy, some are ambivalent and sometimes, though rarely, some are just plain mean.

Learning these wide ranges of behavior and how they communicate requires years of experience and practice and is still an extremely inexact science to even the most experienced wildlife behaviorist. It is always wise to be conservative and give these graceful animals a safe distance and make sure they know you are there. Clapping, singing and generally making a bit of noise in bear country is always a good idea, especially in places on a trail or in the woods with dense vegetation and limited visibility. Carrying and knowing how to use bear spray is also a good idea and has proven to be an effective last resort to stop a bear from making contact. This is most likely in a surprise encounter so having the bear spray in an easy to reach place is pretty important.

How to Find Grizzlies

The best way to find grizzlies is to know what they are eating and where that food source is abundant. Grizzlies are omnivores and in Yellowstone have a diverse diet that varies seasonally and regionally within the GYE. In early Spring they will seek out winter or wolf killed Bison and Elk along with early season grasses and sedges. Later they can be found feeding on elk and moose calves, spawning trout, and fresh spring greens and flowers as the opportunities arise. Throughout the year Grizzlies can be found calmly grazing in open meadows along tree lines making vegetable matter a large part of their diet. Later in the year some grizzlies will seek out the red squirrel middens full of whitebark pine nuts, an important late season high protein food source for some grizzlies. Berries, army cutworm moths, ants, and pocket gophers will also supplement the Grizzlies’ intense nutritional needs. To think about such a prolific predator eating insects, digging up gophers and grazing in a meadow doesn’t fit with their fearsome reputation but in my experience most grizzlies spend a lot more time on these food sources throughout the year.

Grizzlies in the Spring and Summer

Spring is a great time to see grizzlies as they tend to follow the scent of winter killed carcasses that are mostly found in the valley floors and lower elevations where the animals were living during the winter. In Yellowstone grizzlies are commonly seen in the Lamar valley, Hayden valley, the South entrance, the East entrance and Mt Washburn. In Grand Teton, grizzly activity continues to increase every year providing some of the best bear watching in the area. Watch out for bears on the northern part of Antelope flats, Willow Flats, Pacific Creek and the Moose-Wilson road. As summer progresses the bears will spread out in search of food and some bears will move into the high country to follow prey, find fresh vegetation and for some bears feast on the army cutworm moths that congregate in the high talus slopes to escape the summer heat of the plains below.

What to Do Around Grizzlies

Remember to keep your distance and never approach wildlife. This is especially true of large carnivores. Not only is it dangerous, it also stresses the animal and can impact their ability to gain enough weight for winter. As a general rule of thumb, if an animal doesn’t have to stop what they are doing or move away from you their stress level is probably low. If you approach too close they will stop what they are doing and watch you. This means they are concerned and should be your warning that you are too close. If wildlife move away from you or especially run away, you have definitely stressed them enough to force their relocation.

In the national parks the legal distance is 100 yards from bears and wolves. This should be considered a minimum distance and might need to be greater depending on the tolerance of the bear you are watching. Be especially aware of smaller sub-adult bears and sows with cubs who might be more aggressive and less tolerant of an audience. Grizzlies can sprint up to 40 miles per hour and accelerate like a sports car so outrunning them is out of the question. When in doubt, give yourself more space for your safety and theirs.