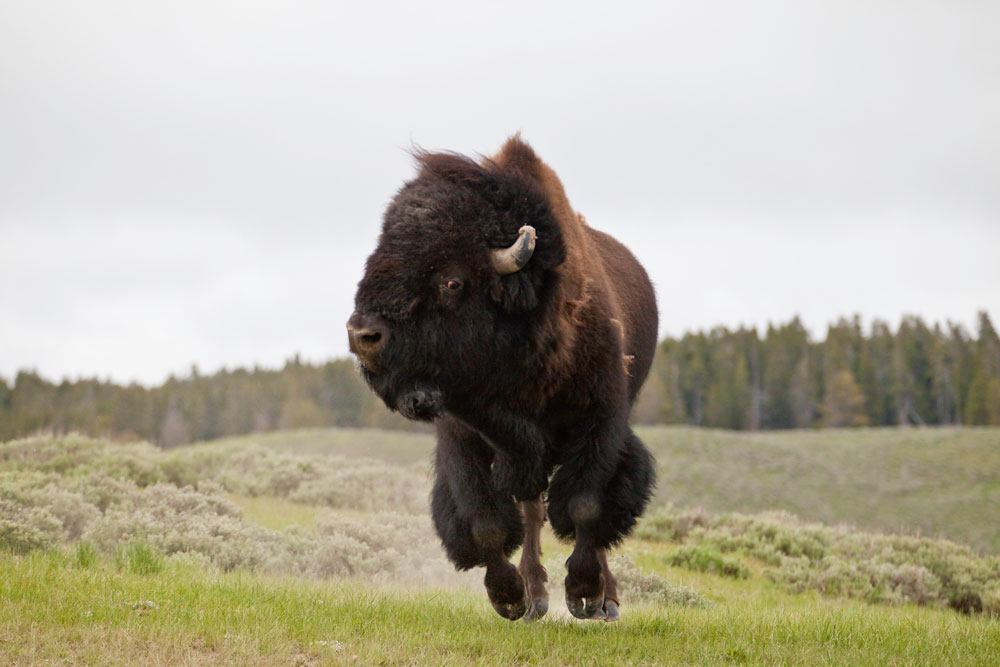 Yellowstone National Park is rich with statistics, interesting facts and wildlife. There are 67 species of mammals including 7 different ungulates and 2 types of bears. One of those ungulates is definitely the most iconic and popular animals that roam freely across this enormous landscape, the buffalo or technically speaking the American Bison.

The American Bison is the largest land mammal in north America with bulls (males) weighing over 2000lbs and the cows (females) over 1000lbs. Despite their weight bison are extremely agile animals that can run up to 35mph, jump up to 6 ft high and swim confidently. Both the bulls and cows have horns but the cows’ horns tend to be thinner and more curved. Bison are herbivores and spend most of their time feeding on grasses and sedge. The humps on their backs are strong muscles that allow them to use their massive heads like a snow plow to get to food in the winter. By sweeping their heads back and forth they can create a hole in the snow deep enough for them to get to the vegetation below.

Though the bison is commonly called the American Buffalo in the western United States, they are actually taxonomically different from Buffalo. There are no ‘real’ buffalo in North America. When European explorers first encountered Bison they were reminded of the buffalo in Africa and Asia so quickly labeled them a type of buffalo. Though they are both in the Bovidae family, they do not share genus and species.

Bison begin mating in late July when you will see bulls and cows begin to pair up. Bison are sexually mature at age of 2 but due to competition bulls don’t get an opportunity to mate until they are older and bigger. The bulls will defend their right to mate by bellowing at approaching competition and, if need be, by sparring. These confrontations can be quite impressive though they rarely hurt each other. The cows will carry the fetus through the winter and give birth in late April. After the rut most males will spend the rest of the year alone or with other bulls. Cows, calves, and immature bulls will travel in herds in order to protect against predation.

A History of the American Bison

Prior to European expansion across North America, 30-60 million Bison roamed from coast to coast and into Canada. In the 1830’s the United States Government began trying to exterminate Bison in order to weaken the Native American resistance to American expansion. By 1902 the last free roaming Bison herd was in Yellowstone where poachers had reduced them to only a couple dozen individuals. The United States Army began aggressively protecting the few remaining Bison and more animals were brought in from captive herds for a breeding program. Over time the numbers were restored to a sustainable level where they remain today. Yellowstone’s target population for Bison is around 3000 with the actual herd sizes typically higher.