The Naming of Yellowstone National Park’s Most Famous Places 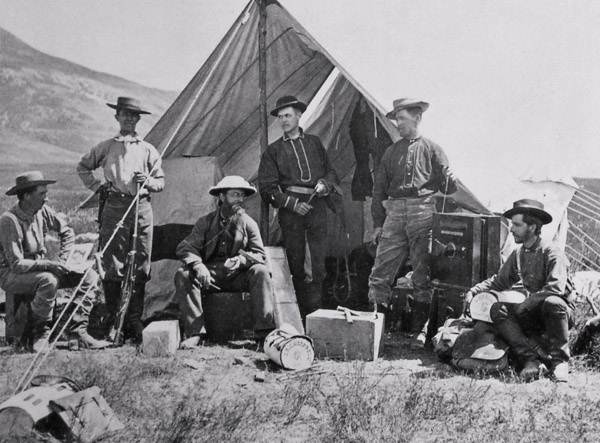 One of the classic books about Yellowstone park history is ‘Yellowstone Place Names’ by longtime Yellowstone National Park historian Lee Whittlesey. Visitors to the park are often curious about the names of classic park features and the best place to answer those questions is in Mr. Whittlesey’s book available online or at visitor centers and park stores in Yellowstone and Grand Teton National Parks. Below are a few of the classic places in Yellowstone that our guests often ask about. The source for all of the places listed below is ‘Yellowstone Place Names‘. For more complete histories on each place below and for a more complete list of places grab a copy of the book. This is one of my favorite books to scan through from time to time and is a great coffee table book for anyone interested in Yellowstone history.

Artist Point – Located on the south rim of Yellowstone’s Grand Canyon, Artist point is one of the best places to view the lower falls and to look downstream at the wild colors and texture of the canyon. It is thought that park photographer F. Jay Haynes named the spot believing that this was the place where painter Thomas Moran made his famous sketches of the canyon (Though Moran was probably on the other side of the canyon when he made his sketches that were the reference for his famous paintings of the canyon in 1872). The first known use of the ‘artist point’ was in Hayne’s guidebook published in 1890.

Artists’ Paintpots – Located north of Gibbon Canyon in the Gibbon Geyser basin, the Artists’ Paintpots were named by geologist Walter Reed. The colorful thermal feature reminded Reed of an artists palette leading to the name

Bechler River – Located in the southwest corner of the park, the Bechler was named after the chief topographer of the famous Hayden Survey of 1872, Gustavus Bechler. The river was named by another member of the expedition, Frank Bradley.

Beehive Geyser – Located in the upper geyser basin near Old Faithful, Bee Hive geyser was first recorded by members the Washburn party in 1870 and named ‘Bee Hive’ due to the shape of the cone which resembled a beehive.

Biscuit Geyser Basin – This geyser basin is part of the larger thermal area known as the Upper Geyser Basin just northwest of Old Faithful. The original name of this feature was probably ‘Soda Geyser Group’ but was changed over the years. ‘Biscuit Basin’ refers to the biscuit shaped formations found here. This is a great basin to walk because it is accessible and has several interesting features and will often have bison grazing nearby.

Boiling River – Located just downhill from Mammoth to the north, this feature has long been known as a great place to soak in a thermal feature (though technically you are soaking in the Gardner River as soaking directly in thermal features in Yellowstone is illegal). Since the temperature of the water is well below boiling but was named by a park tour operator G.L. Henderson who was probably just trying to get press and encourage visitors to visit the area.

Bridge Bay – Located along the northern end of Yellowstone Lake, Bridge Bay is a naturally occurring bay named after Bridge Creek located near there. The bay was named by Park Superintendent Norris in 1880 and has a full marina.

Castle Geyser – Located in the Upper Geyser Basin, Castle Geyser was named by the Washburn expedition in 1870 because of it’s resemblance of “a ruined castle or tower”. This is a popular geyser to try to see erupt but is unpredictable and takes a bit of luck to catch.

Clepsydra Geyser – Located in the Lower Geyser Basin near the Fountain Paintpots, Clepsydra is an active geyser that frequently erupts and is a great place to take sunset photographs. The name comes from an ancient water clock and was applied to the geyser by Theodore Comstock who discovered the geyser in 1873.

Craig Pass – Located 8 miles east of Old Faithful, Craig pass was named by road engineer Hiram Chittenden in the 1890’s. He discovered the pass in 1891 while surveying for the road that currently exists between West Thumb and Old Faithful. It is though it was named after Ida Craig who was probably the first ‘tourist’ to cross the newly built pass.

Crawfish Creek – Located on the southern end of the park, you cross crawfish creek just a couple miles in from the south boundary of the park. Originally named ‘Loud Creek’ it was renamed to better comply with USGS naming standards of the time to use local flora and fauna. In the case of Crawfish creek, the thermal water flowing in upstream warms the water making the creek especially good crawfish habitat.

Dragon’s Mouth Spring – Located in the Mud Volcano area on the south end of Hayden Valley, Dragon’s Mouth is one of the more popular features in the park because of the large amount of steam, belching sounds from the action of the water and steam and the dramatic landscape surrounding it. This feature has been named at least 17 different names before being named Dragon’s Mouth in 1912 by an unknown visitor. The name first appeared in print by guidebook author Louis Elliott in 1913 in the book Six Weeks on Horseback Through Yellowstone Park.

Dunraven Pass – Located six miles north of Canyon, Dunraven Pass (8859 ft) is the highest point on the east side of the Grand Loop Road. Park Superintendent Norris named the pass after the fourth Earl of Dunraven who visited the park in 1874 and wrote about the park in his 1876 book The Great Divide.

Eagle Peak – Located on the east boundary of Yellowstone in the Absarokas, Eagle Peak is the highest point in the park at 11,358 feet high. It was named by the USGS Hague party in 1885.

FireHole River – Originating near the Upper Geyser Basin, the Firehole River flows through some of the most active thermal areas of the park and was named by early explorers and trappers. Just like Jackson Hole, early explorers would regularly name mountain valleys ‘holes’. This was the Fire Hole and subsequently the name was given to the main stream flowing through it.

Fishing Cone – Located along the eastern shore of Yellowstone Lake at the West Thumb Geyser Basin, the Fishing Cone is one of the iconic thermal features of the park. Though not that dramatic, the story of early visitors standing on the feature, catching fish and then cooking the fish in the hot water is a classic Yellowstone tale. It was probably first seen in 1869 by the Folsom party but was first documented in a published story from the 1870 Washburn party. It then became a classic Yellowstone Park experience to fish from the cone and even park managers would demonstrate this to visitors. Today it is considered too dangerous and damaging to stand on thermal features and hasn’t been allowed for decades.

Hayden Valley – Located on the eastern side of the Lower Loop Road just north of Yellowstone Lake, Hayden Valley is named after the famous explorer Ferdinand Hayden. He lead three major geologic survey parties in the area in 1871, 1872 and 1878 with the most famous being the first which lead to the creation of Yellowstone National Park. There is some debate about who actually named the valley but historian Lee Whittlesey, the author of Yellowstone Place Names, has found evidence that a member of the Hayden Survey of 1878 probably named the valley.

Lamar River – Originating on the slopes of Lamar Mountain on the east boundary of the park, the Lamar River flows northwest through the famous Lamar Valley to the Yellowstone River. The river, previously called ‘Beaver Creek’ and the ‘East Fork of the Yellowstone’ was renamed to Lamar River in 1885 by Arnold Hague in honor of his supervisor, Lucius Quintus Cincinnatus Lamar. Lamar was the Secretary of Interior from 1885 through 1888 and was known to have helped prevent the development of railroads into the park during his time Secretary of the Interior due to his interpretation of Congress’s original intent for Yellowstone. His interpretation was incorrect but none the less saved Yellowstone from railroads.

Lamar Valley – Located on the northeast side of Yellowstone, Lamar Valley as become one of the most famous wildlife watching areas in North America. This was especially true after the reintroduction of the Grey Wolf to the park in 1995. The valley was originally called ‘Secluded Valley’ and was probably renamed by Hague after he renamed the river.

Madison River – Originating at the confluence of the Firehole and Gibbon Rivers at Madison Junction on the West side of Yellowstone’s Lower Loop Road, the Madison River is one of three rivers that form the Missouri River. The river was named by the Lewis and Clark Expedition in 1805 in honor of Secretary of State James Madison during their survey of the confluence of the Jefferson, Madison and Gallatin Rivers. They decided that since all three rivers were about the same size they should consider each of the three streams separate and equal contributors to the Missouri River (Which they traveled up from St Louis where it flows into the Mississippi River).

Mud Volcano – Located on the southern boundary or Hayden Valley on the eastern side of the Lower Loop Road, Mud Volcano was named in 1870 by the Washburn party because of the conic volcano shape of the feature combined with the violent eruptions of mud. Today mud volcano is still an active mud pot but no longer erupts and the famous volcano shaped feature has been consumed by the ever changing thermal feature.

Old Faithful Geyser – Located in the Upper Geyser Basin, Old Faithful is by far the most famous geologic feature in Yellowstone and the most single visited attraction in the park. It was first named by the Washburn party in 1870 due to the regular and predictable eruptions. The actual intervals of the eruption have changed over time but Old Faithful remains relatively predictable and certainly the most watched geyser in Yellowstone.

Snake River – Originating along the southern boundary of the park, the Snake River is named after the ‘Snake Indians’ or the Shoshone. The name was first used in 1812 to label one of the country’s biggest rivers. The Snake is over 1000 miles long with about 42 miles of the headwaters being within Yellowstone. The Snake flows into south through Jackson Hole then turns west into Idaho to the terminus at the Columbia River on the border of Washington and Oregon. There is debate about why the Shoshone were called the Snake People but the most credible story I have heard is from a Shoshone Elder. He believes it was because some Shoshone used to dry fish in strips from poles and they looked like snakes, making the white explorers think they fed on snakes. Most history books use some version of the story of a mistaken hand signal while they were trying to communicate and it was misinterpreted as them saying they were the Snake People.

Steamboat Geyser – Located in the Norris Geyser Basin on the northwest side of the Lower Loop Road, Steamboat Geyser was named by the Hayden survey of 1878 because the sound of the geyser erupting sounded like a paddlewheel steamboat. Steamboat Geyser is the tallest geyser in the world and can shoot water up to 400 feet in the air. This is one of the more difficult geysers to see erupt as intervals are sporadic and can be spaced as far apart as 50 years.

Tower Fall – Located on the northeast side of the Grand Loop Road, Tower Fall was named by members of the Washburn party of 1870. The name was chosen because of the rock pinnacles or ‘towers’ that are at the top of the waterfall.